It's those heart-stopping moments...

Gray hairs. I have more gray hairs today than I did yesterday.

As I mentioned before, it seems we've broken the back of winter and spring is slowly coming at last. Temperatures have been above freezing, and the snow is melting. In fact, it's melted off enough that I could finally dig out the walk-through gate in the corral.

Our elderly Jersey cow Matilda and her yearling calf Sean have spent a long boring winter in the corral. Matilda is bottom of the bovine pecking order and would never be able to compete at the feed boxes, so I wanted to make sure she had enough to eat by bringing her into the barn each night. I never meant for her to never get out, but when the deep snows came, there wasn't much choice but to keep her confined in the barn and corral (plus drifts blocked the gates). There's plenty of room, but I'm certain it was boring for her. 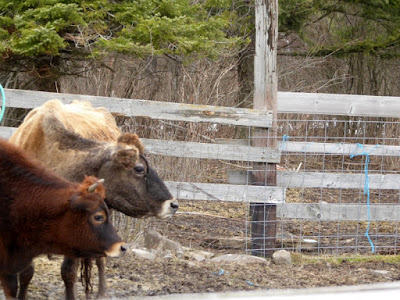 So when the snow melted, I looked forward to the chance to let her and Sean out. I did that yesterday.

It was a mistake. A big, BIG mistake.

Matilda and her calf seemed delighted to be out, able to stretch their legs. Feeling good about things (always a dangerous sign), I went into another part of the barn to rummage for what I needed to get some seeds planted indoors. 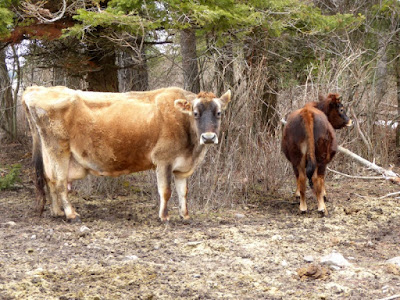 In a few minutes, I heard the moos and bellows of the rest of the herd raising a ruckus. I ran out to the corral in time to see the cattle chasing Matilda down into the woods, crashing through the underbrush. They weren't attacking her, they were merely in high spirits and wanted an excuse to kick up their heels and gamble through the muddy woods.

But poor Matilda, lowest of the low, didn't interpret their high spirits as, well, high spirits. She raced away in panic. They raced after her.

I grabbed a stick, opened the walk-through gate, and headed down to the woods. "What's up?" called Don from the shop window.

"They're chasing Matilda and I want to make sure she's okay," I replied.

I saw the cows milling about in the woods, and a lump on the ground I at first thought was a log. But no, it was my beloved Matilda, stretched flat on the ground on a muddy wet spot. She'd slipped and fallen and couldn't (or wouldn't) get up. 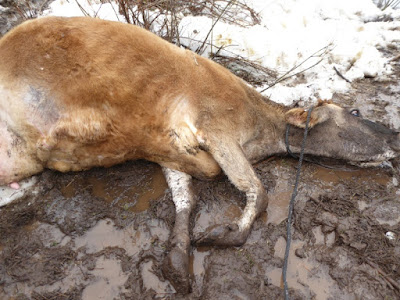 There is no bigger heart-stopping moment than to see a cow flat on her side. It is NOT a healthy position.

I leaped over and brandished my stick to keep the other cows away, meanwhile screaming at the top of my lungs for Don to come help. But he had gone into the house and couldn't hear me from so far away. I couldn't tell if Matilda had broken any legs, but I was worried the excited herd would trample her if I left off guarding her. I stood there and screamed my head off, but no one heard me.

Within moments Don and Younger Daughter had thrown on boots and followed me. Matilda was still flat on the ground. With two other guards brandishing sticks, she was safe from being trampled, but no closer to getting on her feet. It was impossible to bring a vehicle into the woods in these muddy conditions -- it would get stuck instantly -- so our choices were simple: either get her up, or (gulp) shoot her dead.

I slipped a rope round her neck. Her face was pressed into muddy water, and she was stretched head-down on a downward slope -- a very difficult angle. Gently, then more firmly, I tugged at the rope. "Come on, baby, come on, get up ..."

It didn't work. Don and I tried to roll her onto her belly, but she's nearly a thousand pounds and we couldn't budge her. We coaxed and prodded and cajoled, to no avail. We stood, helpless, watching her gasp and tremble on the ground but unable to do anything to help her.

Finally Don had an excellent idea, and sent Younger Daughter up to the barn to fetch some chicken feed. If there's one thing Matilda loves, it's chicken feed (she sneaks some whenever she can, which is dangerous; chicken feed is NOT meant for cows). "But bring it in a bag, not a bucket," Don told her, since other cows would recognize a bucket.

Younger Daughter was back in a few minutes. I took a scoop of chicken feed and held it in front of Matilda's nostrils. They flared, but that was it. She remained on the ground, one eye and ear pressed to the mud. I was beginning to think a .45 to the head was the only alternative at this point.

I held the food to her nostrils a couple more times, then alternately tugged at the rope and tried to encourage her up.

At last -- miraculously! -- she rolled to her side and struggled to her feet, splashing us all head to foot with mud. We didn't care. She was on her feet, and no legs were broken. We cheered.

We let her stand there about five minutes to pull herself together. One ear, the one that was pressed to the ground, was bent downward, and she was caked with mud. Meanwhile we assessed what the easiest and least-blocked path would be back to the corral. Since she was facing downhill, we carefully walked downhill a bit before turning to the side, then back upward toward the barn. Don and Younger Daughter brandished sticks and kept the rest of the herd at bay.

We walked slowly. Matilda was very thankful to go through the gate into the corral. I slipped off the rope, we shooed Sean in behind her, and I fetched a bucket and gave her some of the coveted chicken feed. Then we left her alone to recuperate from her ordeal, and I went into the house to recuperate from MY ordeal. 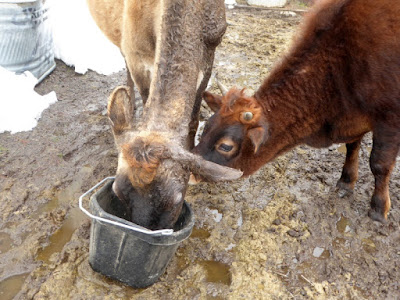 I checked her every fifteen minutes or so. I coaxed her into the barn with a bit more chicken feed... 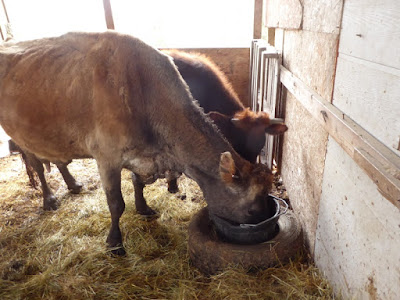 ...but she didn't stay inside. She went back out, but after awhile started chewing her cud, a good sign. However she continued to tremble as the adrenaline finished coursing through her body. Her left ear still faced down -- can you "break" an ear? -- and I wondered if the cartilage was damaged. Over the next couple of hours, however, she was able to move it a bit, so maybe it was just "sprained." 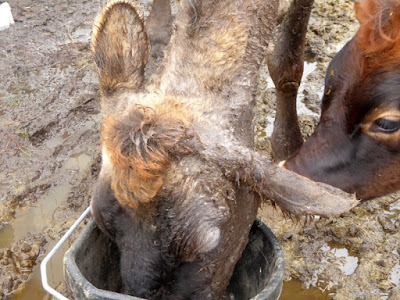 As the mud dried, I took a brush and brushed her down. Her face and ear seemed very sensitive, so I didn't brush those parts; but she seemed grateful to have mud removed from her neck, sides, and legs. 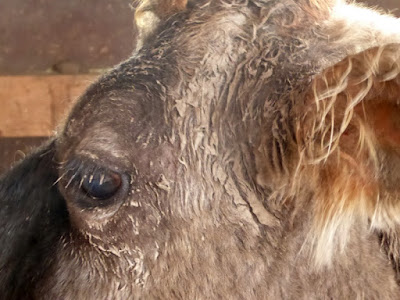 Today she's fine. However we are keeping her in the corral until the mud dries out. We'll let her and Sean loose in the driveway when grass starts growing, so they can introduce fresh foods gradually to their systems, and slowly re-introduce her to the herd under more controlled conditions later on.

Gray hairs. Yep, got more.
Posted by Patrice Lewis at 7:32 AM

Email ThisBlogThis!Share to TwitterShare to FacebookShare to Pinterest
Labels: Matilda