Over many years of various outdoor work (field biologist, farmer, general animal-watcher) I've come to appreciate the sensitive responses animals have to their environment. A case in point: watch those tell-tale ears.

This morning, for example, I went out to feed the beasties. No one seemed alarmed or agitated (thus, no predators in the area) but I did notice these two calves with their ears twitched forward, watching something. 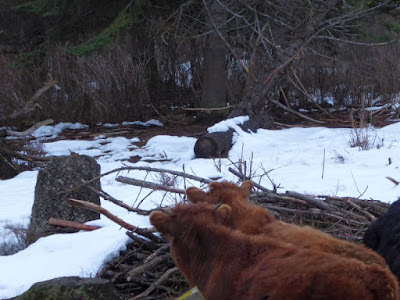 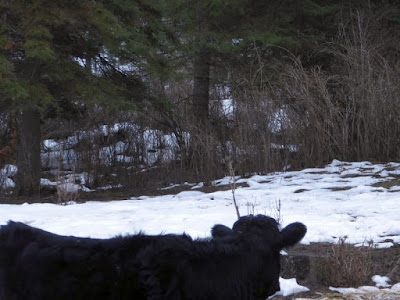 Notice everyone's posture: alert but not alarmed. I suspected a deer, though I couldn't see anything.

I stood quietly for awhile and just watched, and finally saw the deer. Can you see it? 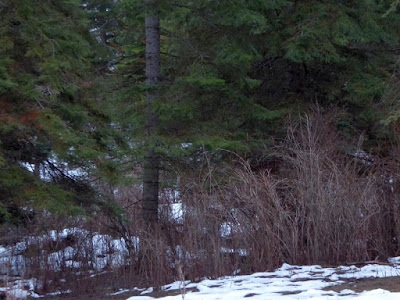 Even though I knew where it was, I had a hard time spotting it until it moved, since it blended so well. (It's right smack in the middle of the photo enlargement below.) 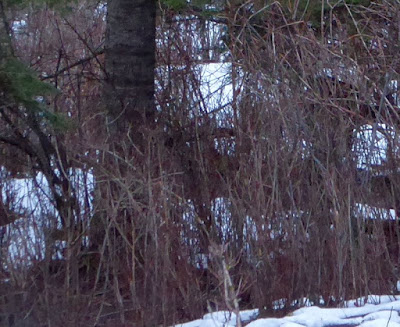 This is just a small example of situational awareness in the wild. Animals have keen senses, and it behooves us to pay attention to the posture, attitudes, and ear positions of critters, both wild and domestic.

This hearkens back to last July when I released the chickens from their coop one morning, and they stood stock still because they saw a great blue heron up a pine tree. I'll copy over the same conclusion from that post, because it bears repeating:

These short and seemingly trivial incidents (cows watching deer, or chickens watching a heron) actually have some deeper implications for people.

Modern humans living in modern society with modern conveniences have learned to ignore the internal red flags that all creatures possess by instinct. In the kill-or-be-killed crucible of nature, to ignore a potential threat may be the last thing an animal ever does.

Yet people will do it all the time. In fact, most modern Americans have cultivated an amazing ability to disregard warning signs, both internal and external. We still have the instincts, but we're often too "civilized" to pay attention to them. But I figure instinct is there for a reason, and that reason might be very important.

This is some of the advice I gave Older Daughter as she prepared to leave the nest: to listen to that still, small voice inside you saying something is wrong. It may be saying something important. God gives us those little red flags now so we can avoid big problems later.
Posted by Patrice Lewis at 5:38 PM