The blueberries are ripening late this year. Last year the first pick was ready by the time I got home from Portland; this year, I just finished the first pick this morning.

Because of the extreme heat we've been having for the last month, most of the garden work (picking, weeding, etc.) is being done in the very early morning. I'm usually out in the garden by 5:30 am or so for a couple of hours of solid work before the heat from the rising sun sends me back inside. (I'm a wimp in heat.)

But the bushes are bearing prolifically. 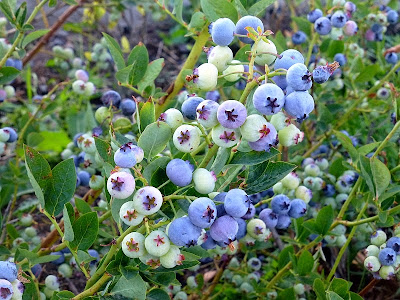 Because my picking time was limited, the first pick (meaning, the first go-round on all the bushes) took me three days. 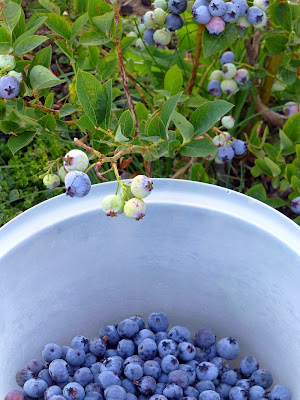 I ended up with two bowls full. 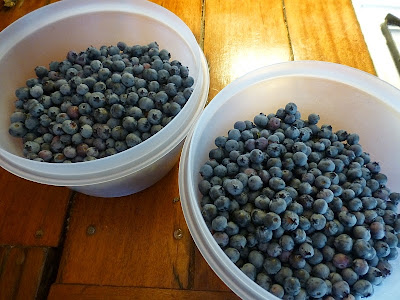 Together they weighed 5.5 lbs. 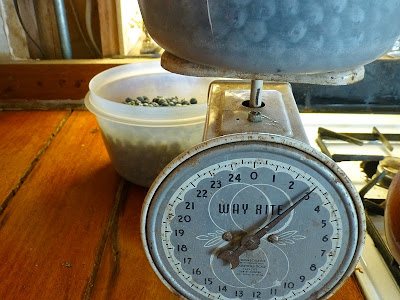 I sat down to sort the berries. I plucked out flower ends (top) and stems (bottom) from various berries, though most were fine.. 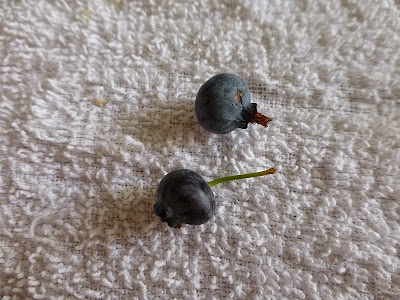 Lihn watched with great interest. She was scared of the berries at first because they rolled. (Remember, she's the parrot equivalent of a toddler.) 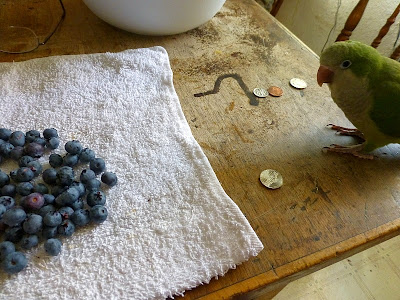 She finally grew brave enough to try one, though she did little more than gum it. 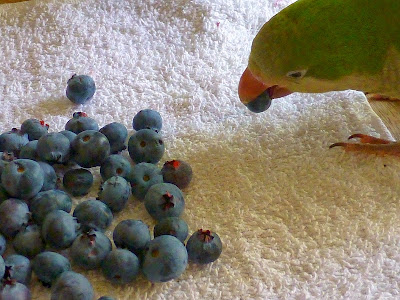 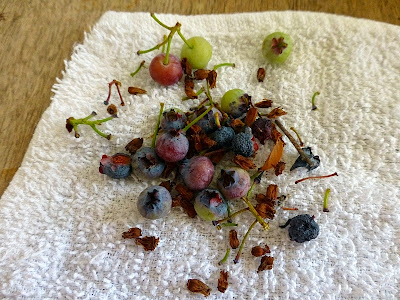 Cleaned and ready to can. 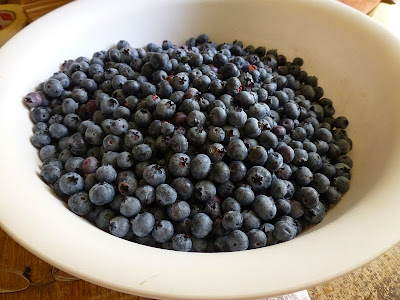 Ten pints, ready for syrup. My canning book recommends cold-packing blueberries (as opposed to hot-packing) so they don't get mushy. 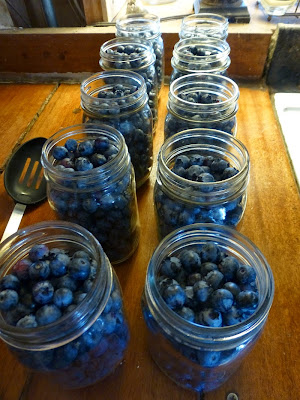 I dissolve sugar in water at a 1:2 ratio, bringing it to a boil for "thin" syrup. 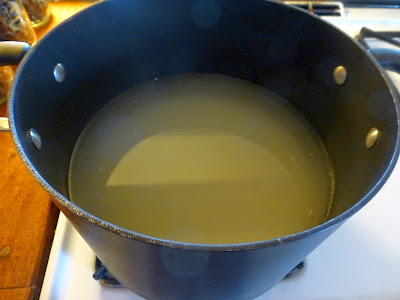 Ladling the syrup into the jars. 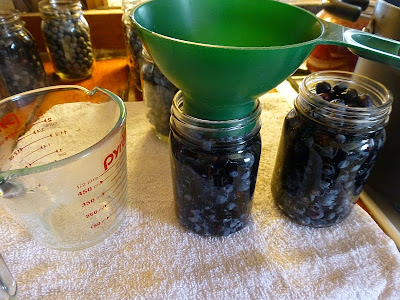 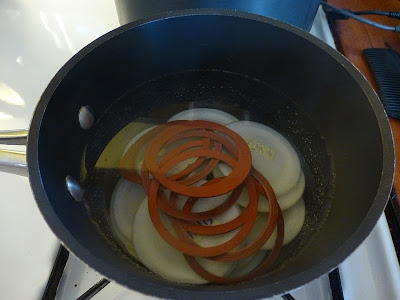 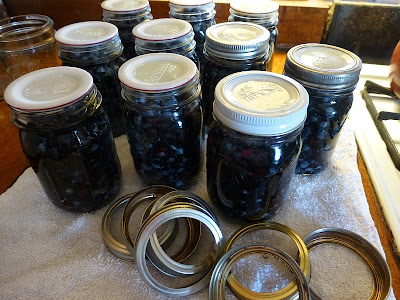 It's important to always use a rack at the bottom of the canning pots so the jars aren't directly touching the pot bottom (which can cause breakage). Blueberries are acidic, so they can be water-bath canned. 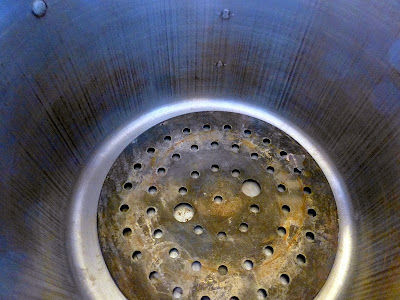 I got six jars in my medium pot, four jars in my smaller pot. The water should come to about an inch above the tops of the jars. 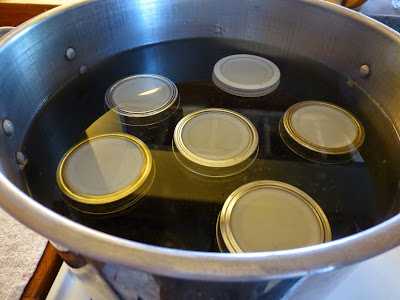 I put a timer by each pot to keep track. Pint jars of blueberries need to be boiled at a rolling boil for fifteen minutes. 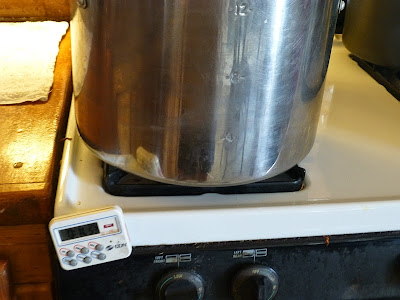 I started the timers when the water reached a rolling boil. This photo is hard to see, but I've lifted the lid (on the left) to see the rapidly-boiling water (under all the steam). 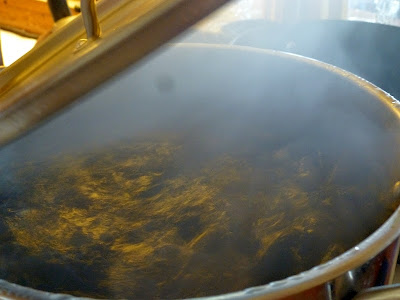 I turned the temperatures to low under the pots and left them alone while the timers ticked. 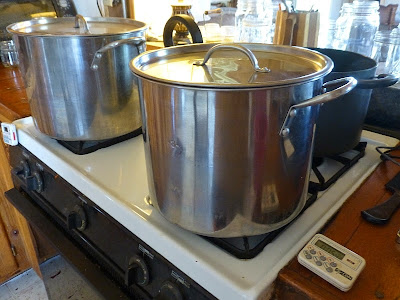 The jars leaked juice as I pulled them out. This is normal. 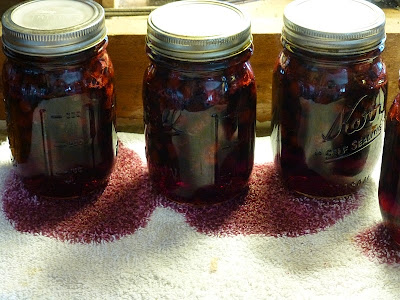 About a year ago, I got lazy and purchased a can of "blueberry pie filling" from the grocery store for a dessert recipe. I use quotes because the product was a joke. There were about five blueberries in the can; the rest was filling.

But these pints of canned blueberries are chock-ful of fresh (organic!) blueberries which can be made into pie filling within minutes. Home canning -- it's the best! 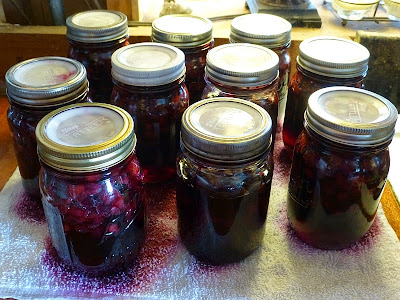 I'll do another picking of blueberries in about a week. I estimate I'll have three more pickings left, maybe another ten pounds total. God bless summer fruit!
Patrice Lewis at 9:20 PM
Share