My affair with Brett Kavanaugh

Here's my weekend WND column entitled "I had an affair with Brett Kavanaugh."

To my surprise, it ended up on the WND skyline: 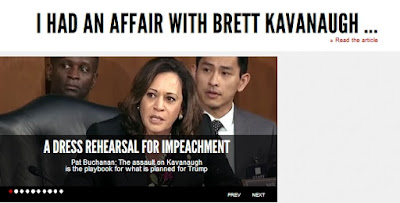 And holy cow, did I get emails. (Except from Robert.) Most were supportive, but a few were blisteringly ugly and full of profanity. No surprise.

Before posting this column here, I took the precaution of backing up my blog. You never know what Google might find offensive. Blogs have been known to disappear.

No, really I did. I can’t remember the time, the place or the circumstances – but I certainly had an affair with Kavanaugh. I’m a woman, so you have to believe everything I say.

It doesn’t matter that my memory is poor, my sources unverified, or that I never told a soul about my passionate involvement with Kavanaugh. I couldn’t possibly have an agenda when it comes to making public my affair. The fact is, I’m an über-leftist woman; therefore everything I say is true. Period, end of sentence, no debate allowed or you’re just a bully.

And now … hang on a second, it’s all coming back to me … did I say I had an affair with Kavanaugh? My bad. The truth is, I was nearly raped by Kavanaugh. I just remembered that part. It was at a party, one of dozens I attended in my youth. Of course, I was drinking and I don’t remember the time, date, year, location or circumstances of the most traumatic event in my life, but I’m positive Kavanaugh tried to rape me back around 1982 or so. Or maybe it was 1983. It’s true. I’m a woman, so you have to believe me.

That’s a new movement, by the way: “Believe women,” a wonderful campaign to force everyone to “believe women” who make sexual assault allegations with no proof. What a great idea! We should believe women, not evidence!

Of course, there are exceptions in the “Believe women” movement. We can’t believe anything against liberal men. Liberal men are incapable of rape or sexual assault. Bill Clinton is a saint who would never mistreat a woman. Juanita Broaddrick was a liar. Oh wait, didn’t I just say women can’t lie? Um, forget I said that. We’ll just forget Broaddrick exists. Don’t believe her.

Of course, this “Believe women” movement couldn’t possibly have any negative repercussions on women who truly have been raped. It means ALL women must be believed, not just the ones who have actually been assaulted.

Now back to me. (It’s all about me.) Of course, I never told anyone – my parents or any friends, let alone law enforcement – that Kavanaugh tried to rape me at this party I can’t remember. The reason was it never happ … I mean, I was too intimidated to talk about it. To my parents. To my best friends. To the school principal.

And the people I name as witnesses to my assault? They just have poor memories when they claim they weren’t at the party. Or maybe they were involved too. Or maybe they're Republicans. What do they know?

Let’s see, back in 1982 I was 20 years old, but I just remembered I was actually 15. Yeah, 15. Underage! I witnessed “rape trains” at these parties I attended. At 15. Somehow during all these dozens of inebriated events with underage minors held at private homes, parental oversight was conspicuously lacking, conveniently providing an absence of adult witnesses to these shenanigans just in case some random kid should get nominated for the Supreme Court 36 years down the line.

I know I saw some traumatic things in my youth – I have a “firm recollection” of lines out the door in the rape rooms at all those parties I kept going to … and going to … but somehow it all slipped my mind that the ultimate culprit behind everything was Kavanaugh until my memory was jogged by six days of careful assessment and the help of an unbiased attorney to get my story straight. Thank goodness for sound legal counseling; where would we be without it?

There are other women coming out of the woodwork to support my claim that Kavanaugh is a sexual predator, and my claims have just as much merit as theirs. My memory is just as accurate as theirs. Above all, my motives are just as pure as theirs. Pure as the driven snow, folks. Really. Honestly. I’m a woman, so you have to believe me.

And because you have to believe me, you can’t pry into my political or personal beliefs. You can’t factor in my support for abortion as a taxpayer-funded right which might be jeopardized if Kavanaugh gets on the Supreme Court. You can’t examine my social media posts where I say Donald Trump is a bleepity-bleeping bleeper bleep bleep. You can’t take into account that I’m a rabid feminist who think all men should shut up and sit down, as Mazie Hirono recommends.

In fact, Hirono says it’s about “whether or not a woman who has been a victim at some point in her life is to be believed.” Does this mean we should “believe” Kavanaugh when he denies he was even at the party where he assaulted me? Of course not. If you believe him over me, then you’re a racist, a bigot, a misogynist and a bully. All men are liars. All women are truthful. Our entire judiciary system is based upon this understanding.

Now I demand an FBI investigation into my accusations. It doesn’t matter if my allegations against Kavanaugh are unprovable. That’s not the point. The point is I need to justify my pay from Mr. Sor … um, what I meant was, I need to speak for all women – “Believe women” – no matter what. And if you don’t believe me, then you’re a racist, a bigot, a misogynist and a bully.

Y’know, it’s kinda fun to go forward with these charges against Kavanaugh! It gets me all kinds of attention and lots of uplifting support from my fellow women. No matter what the outcome of Kavanaugh’s nomination to the Supreme Court, I’m set for life. I can write books, get paid obscene amounts of money for speaking engagements, get a professorship at any university in the country, and be the darling of the progressive set for ruining the lives of Kavanaugh and his family. What’s not to love?

So my deepest thanks to everyone who has helped kill the antiquated and patriarchal concepts of the rule of law and the presumption of innocence. We finally get to reap what we sowed.
Posted by Patrice Lewis at 5:07 PM