Sex and the Country

Here's my WND column for this weekend entitled "Sex and the Country."

For those having difficulty logging onto WND, here's the text:


Sex and the Country
Exclusive: Patrice Lewis says lefty ladies don't seem to know 'where babies come from'
I started thinking the other day about the differences between progressive and conservative women. I believe it comes down to an understanding of where babies come from.

Conservative women understand the connection between sex and babies. They know that because women are unique in their ability to produce another living human, they must restrict sexual activity until it's appropriate (i.e. marriage, when there will be a stable and long-lasting commitment by a man and a woman to care for and nurture the children and each other).

Progressive women appear to deny this connection. Or, if they reluctantly admit there might be a cause-and-effect, they refute the evidence and say it shouldn't matter, and women should be free to be just as sexually active as men, no strings attached.

As just one of endless examples, consider the hit TV show "Sex and the City."

For those of you living under a rock, "Sex and the City" was a sitcom that ran from 1998 to 2004, making it (by sitcom standards) a smash hit. Apparently it featured a lot of women. Having sex. In the city. The popularity of this concept proved so novel that they made it into two movies.

Since I live under a rock with no television reception, I've never seen any episodes of "Sex and the City" and don't ever plan to. But as with so many other bewildering preoccupations popular among progressives, I have to wonder what the appeal is.

It's not like I'm unfamiliar with sex (ahem). Beyond the obvious point that I have two kids, we live on a farm where sex is right out in the open.

Contrary to the moral prudery often assigned to rural folks, sex is a lot more obvious in the great outdoors. After all, a variety of critters engage in the dirty deed in broad daylight, heedless of whatever polite company may be present.

Because of this, children became aware of the facts of life from a very early age. I recall a conversation with my then three-year-old daughter who was watching our rooster engage in his favorite pastime.

"Mommy, what is Mr. Rooster doing to that hen?"

"It's how baby chicks get born."

And at no time since have our children been unfamiliar with the connection between sex and procreation.

But when you look at an episode of "Sex and the City" – which, remember, I'm only extrapolating from hearsay – then sex and procreation are not only separated but actively divorced. And we wonder why our culture is in such trouble?

The funny thing about these types of women is when they make the extraordinary decision to remain celibate, often for two weeks at a stretch, everyone applauds their self-restraint and marvels at their virtue.

"Not having sex is like giving up junk food," says a woman named Katie Jean who decided to embark on a so-called "celibacy cleanse." "Sex in New York for me had become like the 99-cent package of Ding Dongs on the corner." Awww, who says romance is dead?

There was even a book on the subject called "Chastened: The Unexpected Story of My Year without Sex

" in which the author tries a most amazing experiment: Going without sex for an entire (gasp) year. I didn't think this was possible for any modern woman, but boy did she prove me wrong.

Women who hook up with complete strangers at the train station are not looking to hatch chicks or nurse a new lamb. No, they're just looking for a momentary thrill. Personally I think it's more thrilling to try and chase down a calf with a wire tangled around his leg than exchange bodily fluids with a total stranger whose name I don't know, but then you already knew I was weird.

So aside from the titillation factor of in-your-face sex, what accounted for the popularity of "Sex and the City," especially among women? How can the emotional angst of a bunch of stupid twits with no morals hold anyone's interest for more than a week or two?

The answers are predictably inane. "I believe it is popular because many people … relate to at least one of the ladies and of course we all want the clothes and shoes," notes one female Einstein. "Because they talk about sex," points out another. And then there's the unparalleled logic of, "Because it's stupid and people like stupid sh*t." Can't argue with that.

More intellectually, the Australian website Direct Action (honest-to-goodness slogan: "For socialism in the 21st century") noted, "'Sex and the City' has been analyzed by feminists both as an example of progress in women's rights and life options, and as an example of the effects of corporate culture, marketing and the more individualistic strands of feminism in presenting women's empowerment as mainly tied to achieving coupledom, beauty, and personal upward mobility, rather than collective organisation for progressive change."

Unlike sex in the city, sex in the country is nice because it produces something useful. Livestock don't "do it" unless there is a biologically compelling reason. Then anywhere from three weeks to 10 months later, we can anticipate a Joyous Event in the form of chicks, lambs, foals, calves, piglets, or other helpful additions to a farm. And there is nothing prettier than the sight of baby animals prancing around a pasture or peeping around a barnyard. 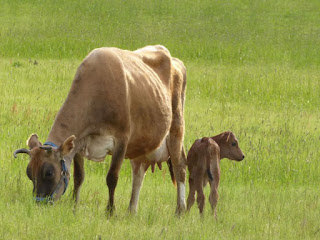 It is for this reason – this blatant and undeniable association between sex and procreation – that rural children are aware of the facts of life in a healthy and responsible way. (Naturally it's up to the parents to reinforce this association.) But when lambs and kittens and foals and chicks are in-your-face evidence that it's best to keep a lid on the hormones unless you want a calf of your own, a lot of country kids grow up knowing the right thing to do.

For those "Sex and the City" type of women who haven't made the connection yet, that means no sex until after marriage.

Now where's my rock? I need to crawl back under it.
Posted by Patrice Lewis at 8:42 AM

Email ThisBlogThis!Share to TwitterShare to FacebookShare to Pinterest
Labels: Progressives, Sex and the City, WorldNetDaily.com