Raising boys to be husbands

Here's my WND column for this weekend, originally titled "Raising boys to be husbands" but re-christened "Nine qualities your future son-in-law must have." I certainly don't mind that the editors retitled it -- especially since they put it on the front-page slider. 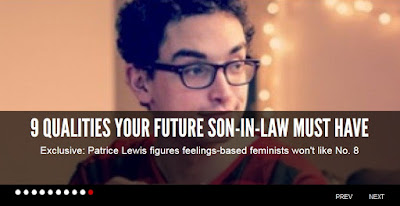 
Raising Boys to be Husbands
Several years ago I read an article entitled “How to Raise the Men We'd Want to Marry.” The article describes how a woman raised her son to be a sensitive, nurturing soul who wasn’t afraid to show emotions. Clearly this woman did a fine job raising her boy – particularly as she apparently did so singlehandedly, since the boy’s father is not mentioned anywhere in the article.

Does this mean I’d want this woman’s son to marry one of my daughters? Probably not. I found the article to be just a touch bit heavy on new-age claptrap, emphasizing the feelings and emotions of boys at the expense of what woman might actually want in a future husband and as the father of her children. Feeeelings are fine, but too often they don’t translate into husband material.

Please don’t misunderstand; I am not suggesting we don’t permit boys to express feelings and emotions (and I’m certain many critics will conclude I’m saying just that). But at what point does a boy’s rough-and-tumble nature supersede his mother’s preference for feeeelings? What does his dad have to say about it?

A boy needs lots of emotional nurturing from his mother when he’s young. But as he grows up, he naturally gravitates away from his mother’s cuddles and embraces toward the more manly example set by other men. He’s less interested in “talking about his feelings” than he is engaging in farting contests with his friends.

So anyway, this whole line of thought started me thinking about how I would want a boy to be raised if he was going to marry one of my daughters. What qualities do I admire in a man? Here’s a partial list, in no particular order (friends will recognize my husband in this list):

• Humor. My husband is funny. Hilariously funny. There are times he has me in stitches as he imitates accents or tells a story with added melodrama or otherwise finds the more amusing side of life. Humor can get you through the darkest and most uncertain of times.

• Morals. Men should have high moral standards. These standards will translate into proper fatherly authority and guidance for his children.

• Warriors. Men should be warriors. I don't mean all men should be soldiers or police officers; I mean a man should be ready, able, and willing to defend his family under whatever circumstances arise. The defense could be as low-key as words (telling his mother to stop picking on his wife) or as dire as shooting an intruder who is threatening his family.

• A work ethic. A man, my husband tells me, should be able to provide for his family. His opinion is not that women shouldn’t work outside the home – quite the contrary – but that women shouldn’t have to work because the man is too lazy to get off his duff and find a job, any job, to make ends meet. A man takes pride in doing whatever lowly job is necessary to provide income for his family.

• The Head. A man should be the Head of the household. A lot of modern women take exception to that term, somehow seeing it as demeaning or insulting. By contrast, I see it as comforting and loving. I am the Heart of this household, and as everyone knows, a body is no good without a heart, just as a body is no good without a head. We need both, and the fact that I view my husband as my Head in no way diminishes my importance as his Heart. But someone has to have the final say in a house for peace and order to prevail, and God in His infinite wisdom ordained that job to go to the man.

Smart women pick men who truly understand what being “the Head” means. Remember the Laura Ingalls Wilder books? Laura admired the way her parents worked together. I once saw it written that Caroline went wherever Charles took her, but Charles would only go where Caroline let him. In other words, being the Head of a household doesn’t mean being a nasty dictator. In means taking wise counsel from others, primarily one’s Heart, to discern the best path for a family to take. An important task for a woman in choosing a husband is to pick a man who truly understands what it means to take his place as Head of the household.

• Respect. A man should respect his wife – but that’s easier said than done unless a wife respects her husband. A woman should never emasculate her man by nagging or complaining about him to her friends. (It drives me nuts to hear women trash-talk their husbands.)

The article referenced at top was written by a feminist, for feminists. She raised her son to support feminist ideals. So while the qualities of “empathy” and “being good listeners” and “expressing feelings” listed in the article (all feminine attributes, I might add) might be a plus, do women want girly-men as husbands?

Feminists might. I’m just glad my husband isn’t one of them. I’d far rather have a funny guy who can fix a sink than a sensitive guy who weeps at chick flicks. I’m just weird that way.
Posted by Patrice Lewis at 5:55 PM