If this chart is anything to go by, it seems the government hired the wrong tech guys when it came to designing the Obamacare website.

According to ZeroHedge.com, "It would appear that the National Instant Criminal Background Check System (NICS) website -- required when purchasing a gun or explosive -- is capable of handling large volumes of users..." 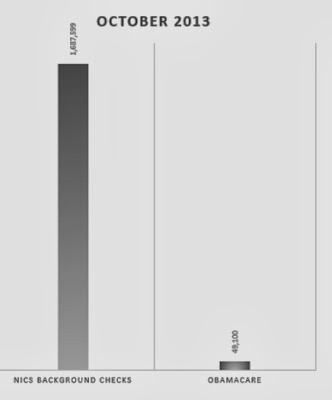 In October of this year, 1,687,599 people got background checks for firearms. 49,100 registered with Obamacare.

The headline reads, Americans 34 Times More Interested In Buying Guns Than Obamacare... though, to be fair, few people were even close to being able to effectively use the Obamacare site.

Not that many wanted to, either.
Posted by Patrice Lewis at 9:43 AM