A dubious example of "hitting the big time"

A reader alerted me to the fact that my photo -- my PHOTO!!! -- appeared in the Summer issue of the Southern Poverty Law Center's quarterly magazine The Intelligence Report. Huh? How on earth did they get my photo?

This reader was correct. A fast internet search pulled up this article discussing, of all things, The Citadel, and depicting MY headshot lifted from MY blog.

I had touched on the issue of The Citadel, a proposed fortified "patriot" compound to be built in this area of Idaho last February, with brief follow-up posts here and here. I believe I made it clear that I thought the whole idea was rather stoopid, and The Citadel certainly does not have any local support. To its credit, the SPLC did not misquote me in that regard. Then WHY does my photo appear directly below the photo of James L. Miller Jr of III Arms, who is intimately associated with The Citadel? 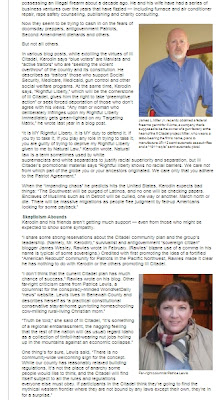 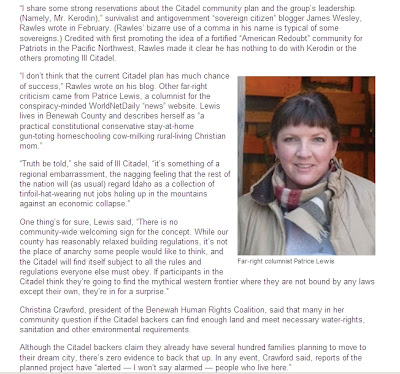 To me this implies a LOT of "guilt by association."

I don't know how the author of this SPLC piece, Bill Morlin, found my blog post (except perhaps through a simple Google search) but he seems surprised that I'm critical of The Citadel since I'm a "far-right" columnist for the "conspiracy-minded WorldNetDaily 'news' website" (Mr. Morlin's words, not mine).

Mr. Morlin also prominently mentions James Rawles of SurvivalBlog, untruthfully calling him an "antigovernment 'sovereign citizen' blogger" (which he isn't) and stating that Mr. Rawles is "promoting the idea of a fortified 'American Redoubt' community" (which he's not). James Rawles put up a post on this issue here.

Still, I suppose I can appreciate one thing, as my husband pointed out tongue-in-cheek: When I start getting mentioned by such attack groups as the Southern Poverty Law Center, I must be (cough) hitting the big time.

Now excuse me, I think I'll go commune with the calves for awhile. I need a calming dose of sweetness from critters who don't have a hateful thought in their heads. 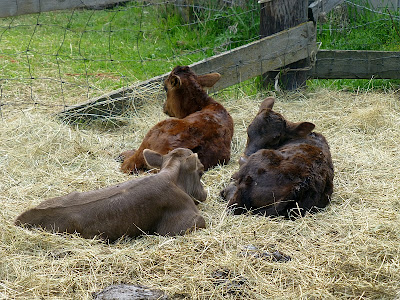 UPDATE: As of 6/2/13, the SPLC has removed my photo from the article. However they have NOT corrected their misstatements about James Rawles.
Posted by Patrice Lewis at 4:57 PM