Another year, another failure

So it's Friday morning. We're working hard on our tankards, slamming to get a large production run of 150 pieces finished and out the door by Monday. 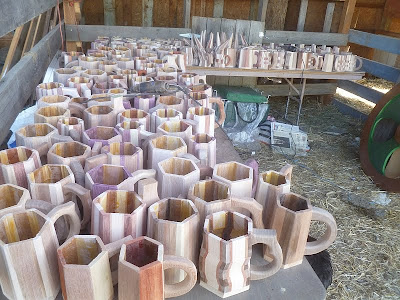 Fortunately I had a germ of an idea for a column, but nothing more than that. First of all I dashed off an email to my editor, apologizing for missing my noon deadline and promising the column by 1 pm max. Then I pounded the keyboard and spit out what has to be one of my most mediocre columns to date, entitled Another Year, Another Failure.

Been one of those weeks.

Still, it did manage to spark the following comment from Robert, my favorite liberal reader, who can always be counted on to put words in peoples' mouths and as such is always good for a chuckle:

If conservatives got their way, things would not be any better for our schools. They want to impose prayer and daily Bible readings on schools where many of the kids have parents who are Jewish, Muslim, Hindu, Buddhist, atheists and agnostics. They want our schools to teach kids creationist idiocy as scientific truth, impose abstinence only sex education, which only INCREASES teenage pregnancy and STDs, and many other things which would be extremely harmful to young people and ultimately, the nations as a whole.
Conservatives who accuse our schools of "indoctrinating" kids with "Godless atheism" , communism and Marxism" etc, which is an idiotic notion are the ones who are guilty of indoctrinating their kids by home schooling them teach them to be homophobic bigots and as ignorant, narrow-minded, intolerant and self-righteous as they are.
(Present company excepted ).

Thank you, Robert. I always enjoy reading your perspectives.
Posted by Patrice Lewis at 9:42 PM